Waste from fuel meets many permaculture principles including catch and store energy, obtain a yield and produce no waste.

There are a number of ways of producing fuel from waste, including:

Anaerobic Digestion, the use of bacteria to decompose organic matter in the absence of oxygen to produce gases. These gases are produced from organic wastes such as livestock manure or food processing waste. The end product is a medium heating value biogas mixture (usually 60% methane, 40% carbon dioxide) and a mixture of solid and liquid fertiliser. Because anaerobic digestion does not produce any more carbon dioxide than would normally be produced from the wastes natural decomposition, it is said to be ‘carbon neutral’.

Gasification involves heating organic waste with a reduced amount of oxygen and/or steam. It produces a synthetic gas, known as syngas, which can be burned independently in a boiler, engine or gas turbine to produce electricity.

Pyrolysis is carried out in the total absence of oxygen. It also produces an energy-rich gas and solid residue. These can then be burned separately to produce electricity. In some pyrolysis processes, the gases are condensed into a liquid fuel. e.g. pyrolysis of waste. Tyres can be used to produce an alternative to diesel fuel.

Incineration involves burning organic material such as waste to produce electricity and heat. Conventional waste incineration plants use the heat produced to generate electricity using a steam turbine. In some cases it is also possible to use the left-over heat. The government is encouraging the development of such combined heat and power (CHP) plants which may be able to provide businesses with a source of heat, where the necessary transmission infrastructure exists or can be installed at reasonable cost.

Biodiesel from waste cooking oils: used cooking oils can be filtered and treated on a domestic scale, and on a larger scale, to run converted diesel cars.

Some landfill sites recover methane which is produced naturally when biological waste breaks down in the absence of oxygen. It can be used to generate energy. Methane is a potent greenhouse gas and contributes towards climate change if it is not captured. 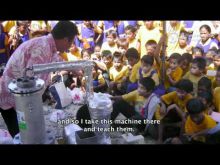