Adobe is a building material made from sand, clay, water and either straw or sticks.

The walls are either made of baked mud bricks or of mud directly applied to a framework (known as cob in the UK), or a mixture of the two. Cob, a close cousin to adobe contains proportioned amounts of soil, clay, water, manure and straw, however this is blended, but not formed in the same way as adobe. Whereas cob is spread and piled over the home's frame and allowed to air dry over several months, adobe is in effect dried bricks of cob that are stacked and mortared together to create a wall or roof. Adobe structures are extremely durable, and account for some of the oldest existing buildings in the world. They are particularly suitable to hot climates as they remain cool, however they are known to be susceptible to earthquake damage. 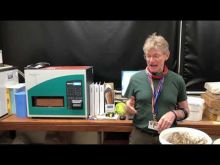