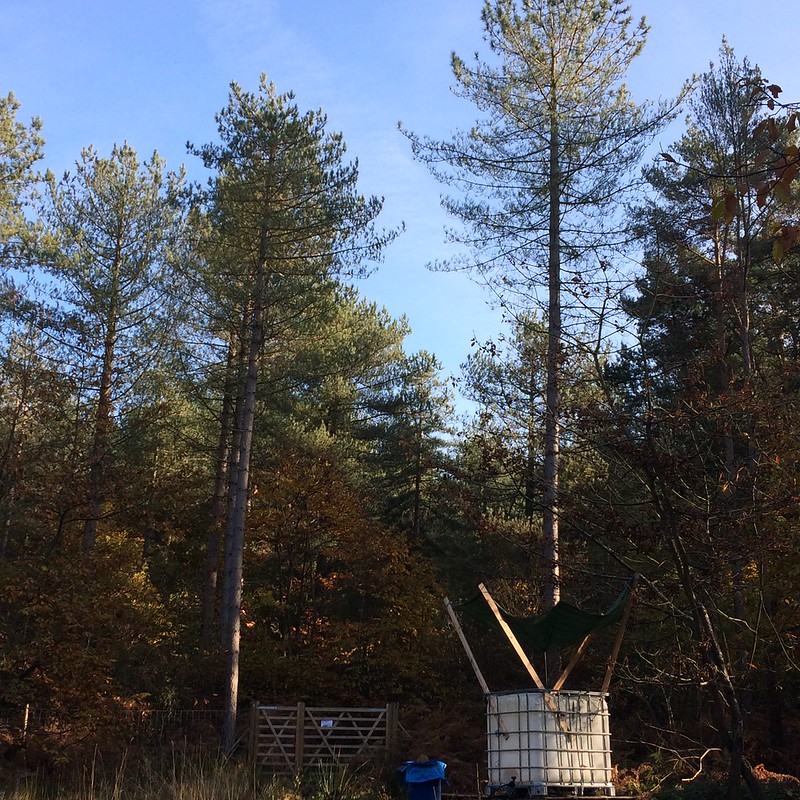 As many of you know, permaculture will often have you disappear down a rabbit hole, if not an entire warren. Or, in permaculture-speak, will take you off the well-beaten track to explore those infamous edges.

The Hornshurst Forest Garden is one such edge. It is an acre site, deer and rabbit fenced, within a much larger 160 acre wood. I have been designing it for the wood owner, Doro Marden, for about 3 years.

We are lucky to have relaxed time frames, allowing us to take a very slow and low-risk approach, doing things incrementally and also letting the design emerge over time - especially the people aspects. It is on a north west facing slope and is literally a clearing in the forest.

Trying to grow fruit trees on a newly cut pine plantation (a.k.a - an ecological desert) was never going to be easy and we certainly have had challenges to overcome. I now have some things to report that I hope will be of interest and help you.

With an initial soil acidity of pH 4.1 in our clearing, I can now report localised changes - in some areas we have readings of neutral (pH 7).

How did we get there?

A number of elements have been working towards the function of neutralising the acidity.

I have watched the brown desert that we started off with become less and less hostile. We have a lot of spontaneous plants growing now and overall the soil is improving both in becoming more neutral but also (almost more impressively) in organic matter. We have gone from a mere sprinkling with predominantly pine needles to several inches of fine humus in places. Success!

With the above process we didn't feel we wanted to invest in conventional fruit trees, in case they failed due to the acidity. I attended Martin Crawford's forest gardening course, and I had the Hornshurst project in mind. I asked Martin's opinion around approaching the site. He suggested grafting on to acid tolerant rootstocks and that is exactly what we have done. Thanks Martin! 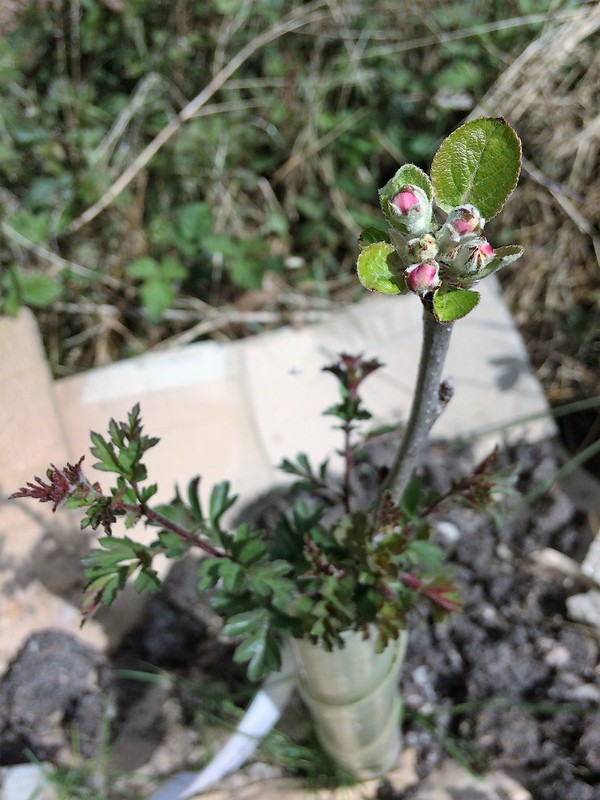 How did we do it?

Not having the skills of grafting amongst us we organised a grafting workshop with master-grafter Peter May. We opened it out to the community and specifically invited members of the Rotherfield Millennium Green - where lots of our heritage apple scions came from. We also had some nice symmetry in our grafting project with one of my permaculture diploma projects at the time; I had designed a community forest garden in Primrose Hill so we were able to take scions from these trees too.

In March 2016 we did the first round of side grafts - apple, pear, quince and medlar onto hawthorn rootstocks and plum varieties onto blackthorn. Many worked initially - though as many gardeners will agree there are other factors contributing to the success of a graft apart from compatibility! We have both lost and gained some since then.

Peter May kindly 'donated' his grafting skills to the project in August 2016 and did bud grafting on the unsuccessful apple grafts. We had a 'grafting reunion' of the previous workshop attendees plus other volunteers in spring 2017.

We grafted onto the remaining gaps of all the fruit species involved. This time we had scions from two organic orchards in Sussex - Oakwood Organic Fruit Farm and Red Coat organic orchard. We have discovered that one of the major factors in the success of the grafts has been hydration (more about that below).

Grafting is a big skill to learn. The following things are useful to note if you are ever thinking of trying it:

Because we have been repeating this exercise we are getting better at it. Currently we have about 50% of our fruit trees grafted into the garden. We will give it one last shot in March 2018 and then any remaining empty spots in November 2018 will be planted with bought trees, by then the garden will be more receptive and hopefully they will survive. 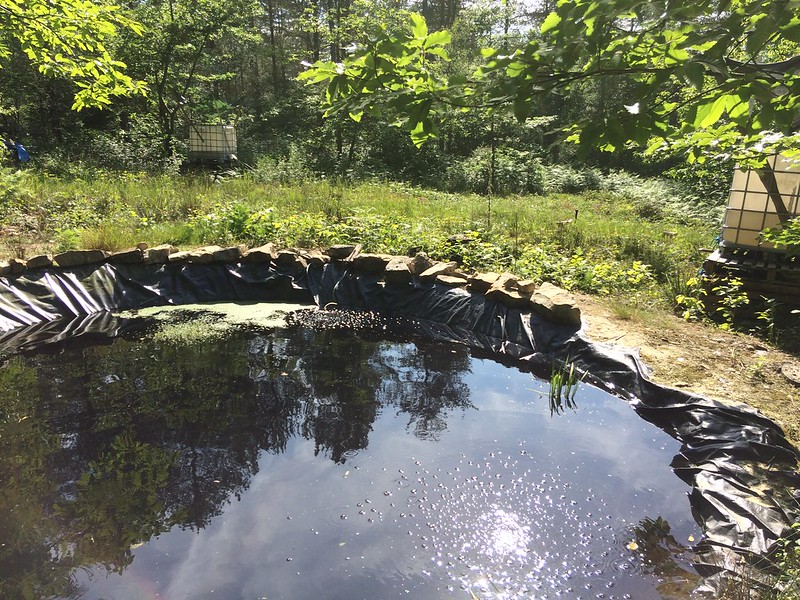 The garden is remote with no services. It's off grid. Therefore, the first system I designed was the entire irrigation system, made of three parts.

How did we do it?

Developing the irrigation systems has had multiple challenges. There are many tweaks that we have had to make along the way, which evolve over time. We only visit the garden twice a month, so often we are waiting to implement the tweaks. Meanwhile, there has been either drought or deluge that we haven't been ready for!

It can feel like playing constant catch up. In reality I would say we have been in the development stage so maybe it's not catch up, it's just part of the overall process. We now have all systems in place now, with a just few problems in each system to solve. In the first system there are squirrels that make holes in the hose and the water catchment part of the IBC tank system. This needs constant tweaking and repair, we are yet to create the perfect form of water catchment but we are closer to it. We are in a much better position now to keep next spring's grafts hydrated.

Venturing down the rabbit hole of growing food in a forest 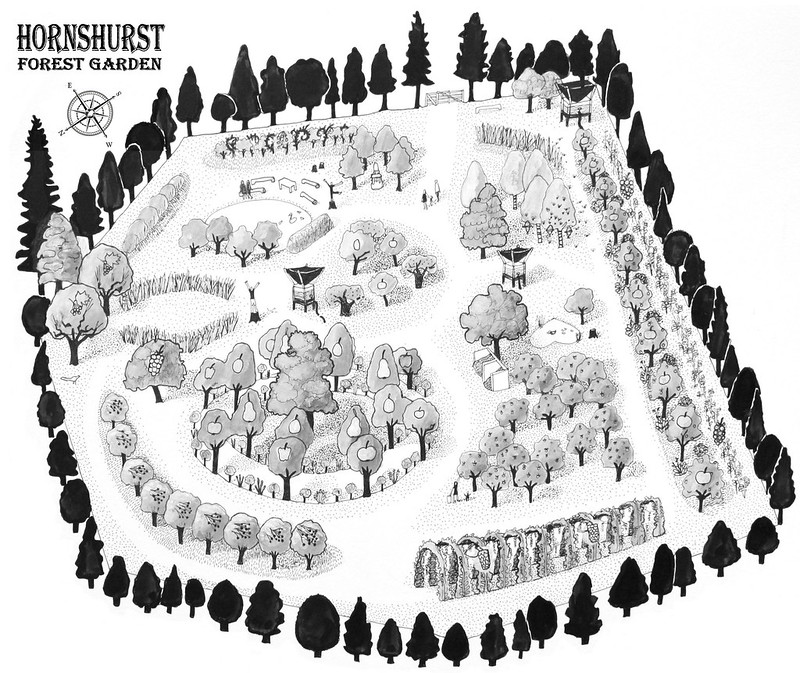 The reason for writing this blog is to share the approach of this project, so perhaps others might venture down the rabbit hole of growing food within a forest. Slowly overcoming some basic gardening challenges such as acidity and lack of water is really satisfying. For me just seeing one of our grafts with blossom made it all worth while!

At times during the birth of this garden I felt close to our ancestors, they regularly made clearings in the forest in order to grow food and it still happens all over the world today. Like a forest garden it would have had a diverse selection of plants rather than rows of production. It feels more gentle and in harmony, to plant in layers and in guilds.

The more I get into forest gardening the more I love it as a system. It suits modernity because we are all so busy not thinking about nature or having no time to tend plants everyday. Knowing that somewhere, like at the bottom of the garden, there are fruit trees and berries to make jam with, herbs to flavour things, and perennial veg all getting on and doing their own thing.

Plus that the yields are there for you, should you need, want or remember gives not only a primal sense of security but is also creating sanctuaries of thriving ecosystems. That's something to feel good about!

At Hornshurst Forest Garden we have been pioneering extending the edges of where we might plant a forest garden and I am happy to report that with each small step forward it's working.

Learn more about managing forests and woodlands on our Knowledge Base.