Access to land - coming to a field near you!

Last Monday 19 June, I went to find out how the Scottish Farm Land Trust was forming after having filled in their survey which was doing the rounds on social media. They have been holding meetings all around the country (Edinburgh, Inverness and Aberdeenshire) this week, co-hosted with Nourish Scotland who are taking a lead on their 'feasibility study'. There were about 20 people at the Edinburgh meeting, many of which were growers on some level.

The aim of the Trust, which formed officially in 2015 as a voluntary group, is essentially to access land for ecological agriculture by holding land in trust. Since receiving a small grant last year to conduct a feasibility study, they have been researching the lie of the land in Scotland to see if there really is any scope for the work they have envisioned. Nourish were brought in at this point to consult on the study with their overarching expertise on food justice in Scotland. Pete Ritchie, founding director of Nourish and Whitmuir Organics, was present at the Edinburgh meeting and helped frame this discussion in the context of Scottish Land Reform which is still a hot topic in Holyrood.  The Land Reform (Scotland) Act 2016 passed successfully through government last year, however most campaigners were underwhlemed by the final draft and criticised the Bill as being 'lacklustre', with many of the more radical amendments having been removed.

What was very interesting was hearing about Terre de Liens, part of the inspiration for the Trust. Terre de Liens was founded in France in 2003, and just 14 years later it has already amassed an enormous 2,500 hectares comprising over 120 farms, with 1,700 active members and 6,500 financial shareholders (of which most are individuals). Using rough calculations that's an average of nearly 21ha per farm, and assuming the majority of their members are tenants on the land that's a hell of a number of jobs! 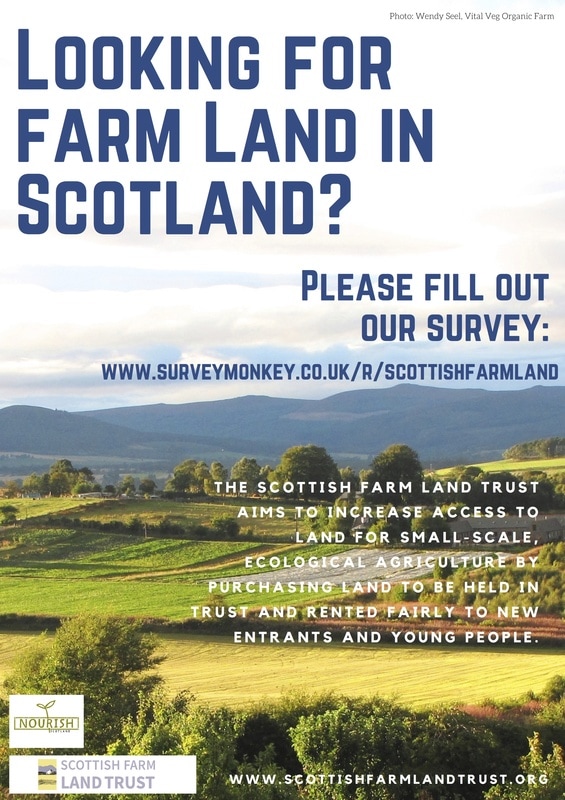 The feasibility study is still ongoing, but so far the prospectus is very, very positive. With just under a month until the survey closes, over 1,250 responses have been recorded showing a definite 'market' of potential land tenants. The vast majority of respondents were not already working the land but were wanting to, with more than half looking to move onto the land within two years and most people looking to work small parcels of land 2-10acres. The biggest barriers being faced are access to land, making a business plan that incorporates all of the many uncertain factors (about the physical land available, but also political and economic uncertainty), and breaking into the traditional rural culture which many city folk consider 'conservative' and 'backward'.

The study goes beyond the survey though (PS - you should really do the survey!!). Other aspects included finding the availability of land within Scotland, including the price, and finding opportunities for raising capital. The latter was, for me, one of the biggest issues present. Luckily, with a cross-sectional group in attendance there were a good few business heads in the group in Edinburgh, and with examples like Terre de Liens in France and a similar project in Germany there was some precedent to go on. We discussed peer-to-peer funding, crowdfunding, a 'co-operative hybrid' model of shareholder-members with no decision making power, corporate investment and private fundraising through membership. Triodos and the Ecological Building Society were mentioned as good allies for exploring the route of corporate investment, as well as 'green' energy groups such as Ecotricity. In regards to available land, Scotland's largest charitable landowners (RSPB, Scottish Wildlife Trust, Scottish Natural Heritage) were discussed as potential avenues for acquiring land for ecological purposes and it was recognised that buying large parcels of land and then dividing them up into manageable chunks would be more economical than searching for lots of small farms. Comrie Croft and the Falkland Estate were recognised as having already achieved something similar to this on a local scale.

The theme of urban farms was continually brought up. It seemed that there was a bit of confusion regarding the purpose of the Farm Land Trust, and those steering it seemed somewhat reluctant to discuss urban farming too much as the process of acquring land in cities is completely different to acquiring rural land. The distinction was made between community gardens, allotments and an urban farm business, which is fair enough as there are now a ton of innovative business models using urban and suburban greenspace to produce marketable food in the last few years, especially in the USA. However, I personally think the SFLT is right in keeping the distinction as the issue of access to land and Land Reform is on a much greater scale in the countryside, whilst there are already loads of urban growing projects in almost every city in the UK!

Overall, the meeting was hugely exciting and there was a great buzz in the air as we closed off the night in the Quaker Meeting House in Edinburgh. We ended with a whole group session to feed back ideas into what the Scottish Farm Land Trust should do to move forward. It was made clear that only a tiny handful of people had been working on this so far, all on a voluntary basis, and that there should be a big push for volunteer engagement once the survey period is over and the results have all been collected and analysed. The main tasks ahead are to try and sort out the governance, legal structure and financial plan, as well as campaigning and networking across the country. Think you have the right expertise, or enough enthusiasm? Contact them asap if you think you can volunteer!

If there was just one thing to take away from this meeting it was this - WATCH THIS SPACE.