Harehope Quarry is a former limestone quarry in Weardale, Co. Durham.  Our work aims to promote a more sustainable future through education, course, events and the projects that we deliver on site.

Harehope Quarry is a former limestone quarry in Weardale, Co. Durham. The quarry is a Local Wildlife Site with areas of wet woodland, species-rich limestone grassland and ponds and rivers. The site is renowned for its exposures of Frosterley Marble as well as characteristic features of limestone geology, including Jacob’s Pot.

Member Project known date:
Friday, 13 January, 2012
Number of people text:
Harehope Quarry Project can accommodate up to 40 people
Contact person by email
Contact Name:
Jill Essam
Number of people involved:
11
Telephone number:
07807 002032
The Harehope Quarry Project was set up shortly before 2 co-op members attended an introductory and full Permaculture design course so Permaculture principles and methods were incorporated into the design as the project has developed. Observation of the site and interaction with the site were undertaken for several years before the project started to develop. The design incorporates producing and storing our own energy, growing food using raised beds, a polytunnel and an embryonic forest garden, grazing animals to improve the biodiversity of our woodland and limestone grassland areas, an aquaculture project and a Walter Segal self-build project utilising renewable sources and services and producing very little waste. The project has had to work creatively to sustain itself and responds to changes as they have occurred. When resources have been available they have always had multiple uses. We are currently reviewing how we function and again Permaculture design principles will inform our decisions.
Website:
Harehope Quarry
Project start date:
January, 1998 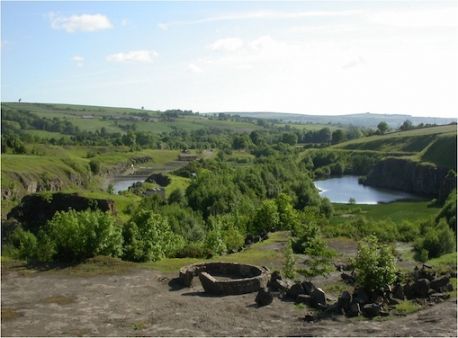